The No Surprises Act

Patient-Centered Outcomes Research Trust Fund (“PCORTF”) fees are due by July 31, 2022. By way of background, at the end of 2019, the Federal Government reauthorized the annual payment of fees by health insurers and group health plans into the PCORTF until 2029. (Such payments were previously set to expire for plan years ending on or after October 1, 2018 and before October 1, 2019, and beyond.) The fee is due by July 31 of the calendar year immediately following the last day of the plan year in which the applicable plan ended. The PCORTF fees fund the Patient Centered Outcome Research Institute (PCORI), which was established by Congress through the Affordable Care Act in 2010. 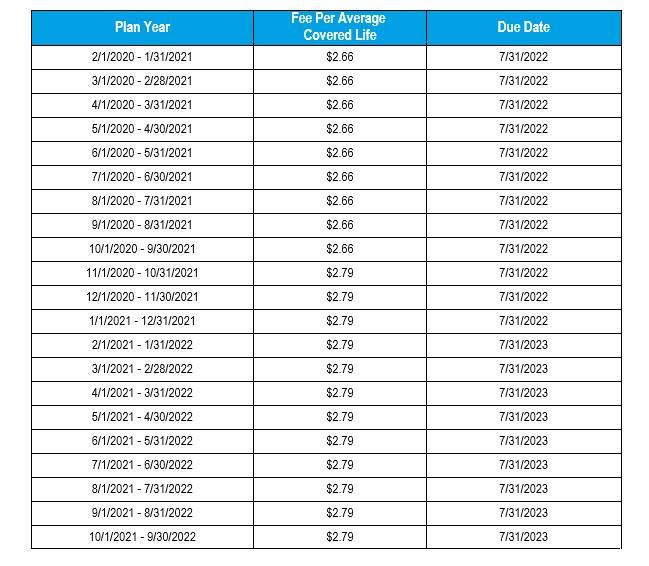 Please note that the IRS does not appear to have yet released the applicable Form 720 (Quarterly Federal Excise Tax Return), which is the form used by plan sponsors of group health plans to report and pay the annual PCORTF fee. (Please note that while Form 720 is filed quarterly for several other federal excise taxes, the PCORTF fee is only required annually, on the second-quarter filing. Accordingly, if a plan sponsor files Form 720 only to report PCORTF fees, a Form 720 should not be filed for the first, third, or fourth quarter.)
Nonetheless, below are the links to the prior Form 720 and corresponding instructions:

The plan sponsor completing Form 720 must report the average number of covered medical lives (employees and dependents) under its plan(s) subject to the PCORTF fee. The instructions with respect to PCORTF are contained on pages 8 and 9 of the Instructions for Form 720 Part II (the first portion of the instructions apply to health insurance policies, as opposed to self-funded health plans). In a nutshell, these instructions briefly reference the alternative methods for calculating the average number of lives covered by a plan for the applicable plan year, and how to complete the Form 720.

With respect to the Form 720 itself, the line item for the PCORTF fee to be reported is referenced at the beginning of Part II (line 133). This line item is divided between “Specified health insurance policies” and “Applicable self-insured health plans.” The form then requires the plan sponsor to list the average number of covered lives for its self-funded plan, which in turn is multiplied by the applicable fee (depending on the plan year) for a final dollar amount to be paid to the Federal government.

Please note, and as discussed above, plan sponsors must pay the annual PCTORF fee via the Form 720 by July 31, 2022.

If you have any questions or need assistance in running the census reports, please do not hesitate to contact your Benefit Success Team.